Isaac, my son, and I were close to each other. We freely shared what we were thinking and feeling.

A couple of times, I went shopping for some stress-relievers. I picked up some word-search books, but Isaac drew my attention to the boys’ themed coloring books.

I distinctly remember one time starting to get out one of my word-search books, until I heard Isaac say, “I’d rather color.” So, I colored.

Speaking of color, Isaac would sometimes let me see what he was seeing. I am at a loss for words, but it was like a kaleidoscope of colors coming towards him.

And smart! Isaac told me I needed to take a box cutter and cut the duct tape in half lengthwise while it was still on the roll.

But I listened to my husband instead, who said I needed to unroll the duct tape and then cut it in half and roll it back up. What a mess that was!

But Isaac’s personhood story also includes some moodiness. After he noticed I did not follow his—admittedly superior—advice, he stopped talking with me.

After a day or so of his silent treatment, I gave him a sincere, heartfelt apology for not listening to him, and he slowly began warming back up to me.

Near the end of his life, I asked him to hold on a little longer until I could get him help. His voice was faint and weak, but he managed to say, “I’ll try.”

We were so close, I felt the exact pain in my heart that he felt in his heart when he died.

I drew a couple of portraits of him after his death that I would love to show you, if you don’t mind. [Not professional renderings and not to scale.] 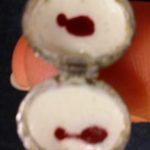 The top portrait is what I first saw when Isaac came out. Two reddish, small roundish shapes surrounded by streak-less, pure white.

When I tried to move him to a container, I inadvertently stretched those two roundish shapes away from each other. Hence the bottom portrait.

As the head was stretched away from the torso, I could see several vertebrae (which I had initially misidentified as his neck, but was actually his spinal column). His vertebrae appear on the portrait as a line between his head and torso.

Read more about Isaac or personhood concepts in our book, When Unborn Babies Speak.